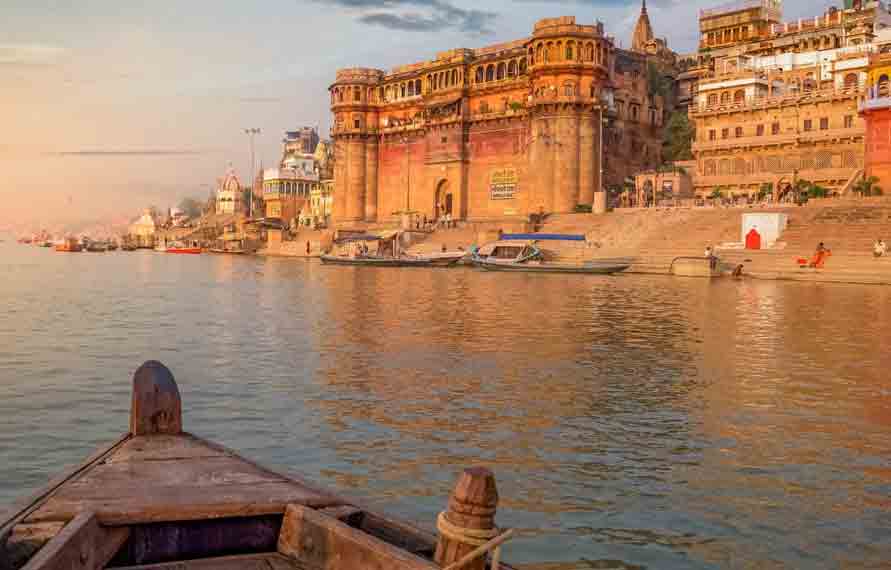 Golden Triangle Tour offers you an opportunity to visit the three most exotic destinations of India named as Delhi, the national capital; Agra, the city of Uttar Pradesh state and Jaipur (Pink City), the capital of Rajasthan. It is the best traversed circuit of India for first time travelers which will provide you the glimpse of the tradition, rich culture, royal heritage and history of India in a short span of time. In the 6 Nights 7 Days Golden Triangle Tour with Varanasi, we have added another destination Varanasi which is located in the state of Uttar Pradesh. Varanasi, the holy city of India, is also known by the name of Kashi and Benaras. This tour will mesmerize you by its unique charm, beauty and diversity.

Day 1: Arrival at Delhi
Upon your arrival at Delhi Airport, our representative will escort you to your hotel.  you will visit Red Fort (famous World Heritage Site),  Jama Masjid (one of the largest Mosques in India) and Chandni Chowk which is the heart of the heritage of the Indian traditional society. Here you will feel like it’s a different world altogether. The area is famous for some local shopping and you can give your taste buds some delicious food at Gali ParantheWali. Overnight stay at the hotel.
Please note:- the Red Fort is closed on every Monday.

Day 2: Delhi - Jaipur by road (Distance-243Kms)
After breakfast you will visit the Historical Monuments enlisted as- Qutub Minar which is 234 feet high, built in the 12th century; the India Gate, a war memorial also known as Indian Army’s Tomb; the President's Residence (formerly the Viceroy's Palace), Parliament House and the Lotus Temple.  In the evening you will depart for Jaipur and transfer to the hotel for overnight stay.

Day 3: Jaipur Sightseeing
After breakfast, your Jaipur excursion will commence from the historic Amber Fort with a royal ride over an elephant which is decorated traditionally. You will have a spectacular hillside view while ascending the fort. Please note it is important to reach early to avoid standing in the queue; Alternatively, Amber Fort is also open for tourists in the evening where you can enjoy the light and sound show, which is about the history of Rajputana Kingdom. The tour continues to Jal Mahal (a palace that is located in the middle of a lake), Jantar Mantar(an astronomical observatory) and the majestic City Palace. Next place of interest is the Hawa Mahal(Palace of winds), which has 953 small windows. Its purpose was to allow royal women to have a glance of the street without being seen. Jaipur is famous for gems, blue pottery, handicrafts and jewelry, which are available in the nearby markets. The Rajasthani cuisine Dal Bati Churma is a must try. You may visit ChokhiDhani, a Village Resort to have a glimpse of the royal Rajasthani Culture and tradition. Overnight  stay at the hotel.

Day 5: Agra Sightseeing – Varanasi by train (Distance- 616 Kms)
Early in the morning, you will spend some quality time at theTaj Mahal, where you can take some beautiful pictures of a magnificent sunrise. The TajMahal is a white marble architecture which was built by the Emperor Shah Jahan as a symbol of love for his deceased wife. You will have your breakfast at the hotel. Post that, you will visit the Agra Fort also known as the Red Fort, which is a UNESCO Heritage Site. You will be mesmerized to see its style of architecture. Later, you will visit Tomb of I'timād-ud-Daulah also known as “Baby Taj”. Breathtaking work has been done on the marble dome and pillars. Next you may visit Akbar’s Tomb, a historical piece of art. In the evening transfer to the railway station to board a train to Varanasi. Overnight journey.

Day 6: Varanasi Sightseeing
After breakfast you will begin the tour from Sarnath, 13 Kms away from Varanasi; where Lord Buddha delivered his first sermon. A guided walk will be scheduled for places like- Chaukhandi Stupa (historical Buddhist stupa), Sarnath Museum, Dhamek Stupa and Mulagandha Kuti Vihar.  Later, you will visit Banaras Hindu University (established in 1916) and some famous temples of Varanasi like Kashi Vishwanath Temple, Tulsi Manas Temple, Bharat Mata Temple etc. In the evening, you will arrive at Dashashwamedh Ghat  where people gather at the banks of the river Ganges to participate in the grand aarti ceremony. The Aarti starts with the chanting of hymns and prayers in the praise of the Holy River. It offers spectacular sensory experience, when hundreds of lamps light up the riverside at dusk, the entire city of Varanasi comes to a standstill and the sound of chimes and dongs reverberates on each and every street. Overnight stay at the hotel.